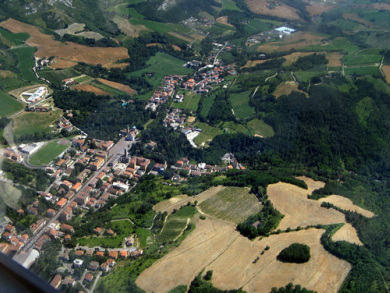 Flag of Benito Mussolini
On July 29, 1883 the original axis power of World War 2 was born. Benito Mussolini was born in a small Italian village called Predappio, Italy. As a small child, Mussolini grew up in a large family who were poor and were field workers. Mussolini’s father shaped most of his dictatorial beliefs for he was a blacksmith and an atheist in which he was enraged about social injustice issues. His mother though, wanted Benito to be well educated and be able to succeed in life. His parents had named him after Benito Juarez, a Mexican revolutionary leader, in which they thought he would follow after. Once in school, Mussolini was known to be very aggressive, bullying, and stubborn which lead to him having few friends. Mussolini’s dictatorial idea of revolution and leadership was formed when he was in school and noticed that the poor children were treated differently than the rich ones. Mussolini succeeded in school and became a teacher, but was not satisfied with this, so he then moved to Switzerland in 1902 for other jobs. In Switzerland, he spent time in jail for homelessness which made him want to rise up against the authorities and become a socialist. Years later, he returned to Italy fought in the war and began working as a magazine editor at La Lotta di Classe. When Italy went into war with Turley in 1911, Mussolini and his colleagues favored peace and this was the moment when the idea of workers bundling together as one formed fascism.

At the Beginning of World War I, Mussolini flipped and now was a pro-war supporter because he thought Italy would collapse and bring a revolution. This caused Mussolini to be expelled from the Socialist Party. Mussolini gathered some capitalist supporters and took advantage somber mood and weak economy in Italy after the defeat in World War I. Mussolini planted the seed of fascism and gathered his black-shirted war veterans, to use violence against other opinionated parties. Mussolini was becoming more and more powerful and was thinking the thoughts of dictatorship. In 1921, he received a seat in parliament in which increased his power. In 1922, Mussolini and his Fascists threatened to “March on Rome” in order to take over power, this lead to King Victor giving Mussolini the seat of Prime Minister. Mussolini received widespread support even from none fascists because of his use of journalism and propaganda that made “Il Duce” a strong problem solver for Italy. This strong political figure became dictator in 1926, while removing all political parties and the government system. “Il Duce” wanted to renew Italy back to its strength in the Roman Empire; he did this by invading Ethiopia in 1935. Il Duce’s power had hit home to many in Europe, but most importantly a young power known as Adolf Hitler. Hitler admired Mussolini phrases, symbols, and speeches enough to invite him to Germany to show off his regime. Mussolini was impressed by Hitler’s military and power over the people in Germany so much that they formed a “Pact of Steel” to ensure the protection of each other’s countries together. These new “Axis” powers both imposed each other’s law in their countries such as the anti-Semitism laws in Italy, even though Mussolini had many Jewish comrades.  When Hitler began moving his forces across enemy lines, Mussolini officially entered into the war and planned to ride out on a white horse after all of Italy’s victories.

Unfortunately, Mussolini’s power was declining because of anger from his countrymen because of the harsh policies and the poor performance on the battlefield which led to Allied invasion. In 1943, the Fascist Council removed him from office and then he was taken into custody by the king. The faithful Germans rescued him from captivity and eventually Hitler gave him a Socialist Republic in Northern Italy to control. He captured his former colleagues and killed them. On September 3, 1943, Italy was invaded by Allied powers and surrendered immediately. When Mussolini tried to escape from Switzerland, Italian Partisans captured him and he was shot the next day. He and his colleagues’ bodies were hung in the streets of Milan and later taken down and buried.