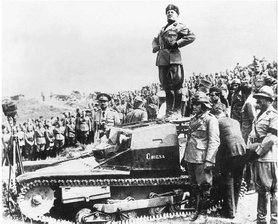 Benito Mussolini Standing on top of a Tank
Benito Mussolini’s role in the Second World War was significant because of his rise in power from nationalism, fascism, militarism, and his entrance into the war. Il Duce’s practice of fascism during World War II was important because it took out all political powers and introduced Italy to a revolution against the monarchy which led to Mussolini’s drastic gain in power. Benito Mussolini’s use of nationalism during World War II was important because it united Italy under one power which increased his power in his dictatorship. Mussolini’s focus on Italian military strength was very important because it showed to the Italian people and the rest of the world that Mussolini was serious about restoring Italy back to its strength during Roman times. Finally, Il Duce’s declaration of war was extremely important to the outcome of World War II because his military failures forced the Nazi’s to divert critical military strength to bolster the inept, unmotivated, and poorly equipped Italian armed forces. If Mussolini’s army was prepared and trained for his wartime aspirations, the Allied victory would have been much less decisive than it was. To conclude, Benito Mussolini’s rise in power during his dictatorship in World War II was because of his use of nationalism, militarism, and fascism while declining in power because of his un-prepared entrance into the Second World War.