Mussolini's Use of Militarism and Nationalism on the Italian People 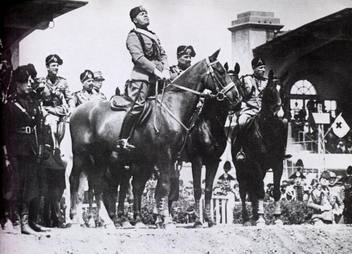 Mussolini in Full Military Uniform with Generals
The key factors used by Benito Mussolini to gain the trust of the Italian people were militarism and nationalism. Nationalism is devotion and patriotism to your country with constant glorification and promotion of the country’s values and culture. This constant promotion of the country’s values led to absolutely unjustifiable decisions that were perceived as setting standards for a country’s people, but actually inhumane acts. Mussolini promoted the cultural and political values of the Italian Fascists by using lots of propaganda across Italy. This large amount of propaganda displayed across the country is important because it made the Italian population become more focused on fascism and military power, which strengthened Mussolini’s power in his dictatorship. Mussolini used nationalism to promote the growth and need of militarism in Italy along with Italian Strength. He used the patriotism from his country to give Italy the idea that if they want to become a force as big as they were during the Roman Empire that they would need to have a strong military and constantly promote Italian values. To promote this ideal, Mussolini ordered children from ages 16-65 to enroll in the “New Empires” Military. This new side of Mussolini showed to the Italian people and the rest of the world that he was serious about making Italy the force it was back in the days of the Roman Empire. This use of militarism to enforce national superiority and strength was important because it made Italy become a large threat to neighboring countries and also threatened the balance of power and created a potential for war. These nationalistic, militaristic, and fascist values enforced and promoted by the Italians where what eventually led to Italy joining the axis powers and going to war against the allied powers.